Dec 1, 2022: Relevant Magazine: ​Beth Moore on How to Handle Your Spiritual Coming-of-Age
​There is a coming-of-age for fruit-bearing Jesus-followers. At some point in your growth in the faith, you will face a drought or a plague or a blight of some kind. That’s when you will discover what your fruit is made of—and if it can withstand the elements that rail against it.
​Best selling Christian author and Living Proof Ministries president Beth Moore made a comment regarding Christian nationalism that went viral on Twitter yesterday (Nov 14).
Moore’s words didn’t leave any room for interpretation, as she let her Christian followers know exactly where she stands when it comes to the political philosophy.
“Christian nationalism isn’t the way ahead for Jesus followers. Christian faithfulness is,” the renowned Bible teacher explained. “It’s fidelity to Christ—not fidelity to notions of American Christianity or to any political party—that will bring light into this present darkness. The church is bride to no one but Christ.”  --Church Leader: ​Beth Moore’s Tweet on Christian Nationalism Goes Viral 11.15.22
Apr 26, 2022: Roys Report: ​Jesus Saved Beth Moore’s Life. Twitter Blew It Up. A New Memoir Will Tell the Story.
​For the past few years, Bible teacher and best-selling author Beth Moore has been one tweet away from disaster.
Moore, perhaps the best-known ex-Southern Baptist in the country, will recount her Twitter battles, her split with her former denomination and, more importantly, her lifelong journey with Jesus, in a new memoir titled “All My Knotted-Up Life,” due out from Tyndale in April 2023. 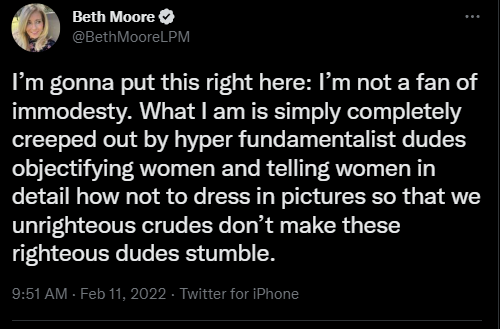 Mar 4, 2022: G3: ​Beth Moore on Modesty and Creepy Righteous Dudes
​God is the one who invented the sexual relationship and He is the One who created sexual attraction and placed it within men and women. Men, for the most part, are visually attracted to women. This is the way that God made them. It should not be viewed as a flaw or a source of guilt. Many men today feel a false sense of guilt for their in-built God-given sex drive. They are made to feel like creeps by their own misguided consciences and by women who desire to practice liberty at the expense of their brothers in Christ.
Jan 3, 2022: Virtue Online: Former Southern Baptist Preacher Beth Moore Joins the Anglican Church in North America
She has the vacant stare through a mop of peroxide blonde hair of someone right out of central casting, but Beth Moore managed to convince millions of Southern Baptists that she was made of the right stuff. She built a reputation over three decades as a Bible teacher and preacher...and a $15 million empire.
Feb 4, 2022: Christian Headlines: ​Beth Moore urges Christian Leaders to Apologize for Spreading Misinformation
"I am baffled how often professing believers in Christ—often leaders—feel no need whatsoever to apologize—publicly or privately—or clear up misinformation they spread. It seems, if you're a watchdog for the church, you get to bite at will. You're somehow above the ethics of Jesus," she wrote on Twitter on Wednesday.
Aug 5, 2021: Religion News Service: ​Beth Moore left the SBC after the SBC left women to fend for themselves
Her decision made me reflect on the past, present and future of women in the denomination and, more specifically, on how Beth’s and my very different experiences might be instructive in understanding how we got here — and where we might go.

July 1, 2021: Relevant Magazine: ​Pew Study: Trump’s White Evangelical Support Increased Between 2016 and 2020
White evangelicals have reliably voted Republican since the Reagan years, but the voting bloc met challenges from within its own party, including vocal Trump critics like Dr. Russell Moore and Beth Moore. However, such criticisms appeared to fall on deaf ears. Pew estimates that without Trump’s White evangelical base, Biden would have walloped Trump by more than 20 points.
Mar 10, 2021: G3: Beth Moore’s Departure and the SBC’s Failure
A RNS article broke the news of Beth Moore’s departure from the SBC. It levied the charge that her view of Donald Trump and women preaching were the impetus. They argued as if these were the central issues that gave people pause over Mrs. Moore. However, this was not true for me.

September 2, 2020:
​👉California pastor and author John MacArthur has been steadily going off the deep end for awhile now..MacArthur has referred to Catholicism as the "Kingdom of Satan, attacking Steven Furtick and Beth Moore. .But if you read his theology about 10 years ago you could see the beginning. In a nutshell, it's a desire for power which is primary motivation over proclaiming Jesus as Lord to a state that could use the message.,
Feb 18, 2020: Christian Post: Women aren't trying to take over SBC pulpits, please stop fighting, Beth Moore says
Concerned that the Southern Baptist Convention is being "torn apart' by the devil, author and Bible teacher Beth Moore addressed the subject of women preaching, a contentious issue within the denomination that doesn't allow women to be pastors. 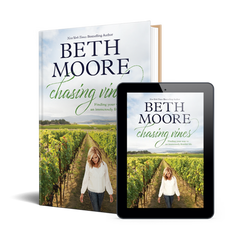 ​Jan 9. 2020: Christianity Today: ​Beth Moore: God Uses Your Mistakes for Good
Years ago, when the number of attendees at Living Proof Live events started swelling—and, consequently, scaring me half to death—I decided that God would be most honored (and I’d be most reliant on him) if I fasted from the time each conference began until after it ended. If effectiveness increased in response to a combination of fasting and praying, as Scripture indicated it did, why wouldn’t the same formula work for fasting and speaking?

​Dec 31, 2019: Christian Headlines: 9. JOHN MACARTHUR TELLS BETH MOORE TO ‘GO HOME’
Pastor Brandon Cox also commented on the situation writing, “The host says, ‘Beth Moore.’ And a man who is supposed to be a model of biblical manhood and spiritual leadership responds, ‘Go home!’ And a room full of men laugh. This is sad. It's unbiblical. But it's the fruit of arrogance.”
June 5, 2018: MercyHouse: ​What's happening in the Southern Baptist Convention and why should I care?
If you've been paying any attention to the news over the last few months, you've probably heard news stories and editorializing about the Southern Baptist Convention (SBC).  They've been embroiled in a controversy that has included the ousting of some high profile leaders in the denomination.  Two of the biggest are Frank Page and Paige Patterson.  Frank Page was the president of the denomination from 2010-2018 and was recently ousted because of a "morally inappropriate" relationship.  Paige Patterson was the president of Southwestern Baptist Theological Seminary from 2003-2018 until recently fired because of inappropriate comments he made about the domestic abuse of a woman and allegations that he didn't properly handle the report of a rape that happened on his campus 15 years ago.   This has caused quite a stir in the denomination and many have called for a deep repentance among all who make up the SBC family.  See these articles by Beth Moore, Albert Mohler, and Sam Rainer for a taste of these kinds of calls for change.  ​
​Wanda Elizabeth "Beth" Moore (born Wanda Elizabeth Green on June 16, 1957) is an American evangelist, author, and Bible teacher. She is the founder of Living Proof Ministries, a Bible-based organization for women based in Houston, Texas. The ministry focuses on aiding women who desire to model their lives on evangelical Christian principles. The ministry, in conjunction with LifeWay Christian Resources, conducts more than a dozen conferences, known as "Living Proof Live", around the United States annually. Travis Cottrell leads worship at the conferences. From 2007 to 2011, Moore, Kay Arthur, and Priscilla Shirer,collaborated on another LifeWay weekend conference, "Deeper Still: The Event". Moore also teaches through her radio show, Living Proof with Beth Moore, and appears as a regular on the television program LIFE Today, where she hosts "Wednesdays in the Word". (formally known as "Wednesdays with Beth").

Additionally, Moore writes books and produces video resources based on the Bible studies that she conducts at the Living Proof Live conferences and at Houston's First Baptist Church church. She currently attends Bayou City Fellowship, Houston, Texas, where her son-in-law, Curtis Jones, is lead pastor. She has taught at conferences for women in numerous countries, including Ireland, England, Singapore, the Philippines, Puerto Rico, and India