Dec 14, 2021: The Richest: ​Holy Millions: 10 Richest Celebrity Preachers In The World
Scandals always seem to follow mega pastors, no matter which part of the world they come from. Benny Hinn was originally born in Tel Aviv-Yafo, Israel, and has been recognized internationally for his miraculous healing powers, which always happens to be televised. ​
​There is a popular and perilous rumour around, inspired by the late Myles Munroe and Benny Hinn. It suggests that the sovereign God requires man’s permission to do anything on earth. Munroe claimed that the only creature with authority on earth is mankind, ‘a spirit in a dirt body.’ Once, when hosted by Benny Hinn, Munroe insisted that because God is a spirit without a body, he cannot operate on earth without permission from humanity. ‘Any spirit without a body is illegal on planet earth’ he says, ‘even God Himself is illegal on earth.’ How then does God get the license to operate on earth? Munroe’s reply: ‘Through prayers’. -For Munroe, prayer is ‘man giving God permission or license to interfere in earth’s affairs.’ Indeed, he belives ‘God could do nothing on earth without a human giving Him access.’​ Joseph Byamukama
​Oct 29, 2021: OCR: ​Dana Point home of late ‘Melodyland’ founder seeks $9 million
​Televangelist Benny Hinn visited the couple at their home in 2016 for a Periscope live stream. It’s available on Hinn’s YouTube Channel.
​Aug 12, 2021: Briefly: Suzanne Hinn's biography: What happened to Benny Hinn's wife?
Suzanne Hinn is the founder of the Purifying Fire International ministry. The ministry transforms the lives of needy members in Florida and California. Besides her commendable works of charity, most people know Suzanne as Benny Hinn's wife. She once ignited a heated debate among Christians when she mentioned "Holy Ghost Enema" in a sermon.
May 24, 2021: Daily Post: Millions impacted as Pastor Chris Oyakhilome teaches new heights during Global Ministers’ Classroom
His long-time friend and renowned televangelist, Pastor Benny Hinn, also ministered at the online pastor training session.
Oct 30, 2019: Bella Naija: ​Pastor Benny Hinn Likens Pastor Chris’ Miracles to Those in the Book Of Acts
There was an outpouring of praise recently in a sensational video featuring Pastor Benny Hinn. Pastor Hinn reviewed the work of his dear friend, Dr. Chris Oyakhilome. He noted that they were “more like family than friends” and their partnership brings great benefits to world Evangelism.
September 19, 2019: Christianity Today:  ​Benny Hinn Renounces His Selling of God’s Blessings. Critics Want More.
Observers take wait-and-see approach to televangelist “correcting” his prosperity gospel theology.
Sept 8, 2019: Reach 96.3: ​'I'm sorry:' Benny Hinn shares more on his renunciation of prosperity gospel
​Popular 67-year-old televangelist Benny Hinn has changed his tune on a crucial point of his theological teachings.
The preacher, who has taught prosperity theology for most of his ministry, has now rejected the way of teaching, calling it an "offence to the Holy Spirit."
June 1, 2017: Religion News Service:  ​Global televangelists to launch new TV station
​Two prominent televangelists, Chris Oyakhilome and Benny Hinn, are launching a 24-hour TV channel, “LoveWorld USA,” which will be available in July to Spectrum cable subscribers.
This announcement Thursday (June 1) during an online news conference comes five weeks after IRS agents raided the Benny Hinn Ministries headquarters in North Texas.
​June 10, 2016: UGChristian: Benny Hinn to share pulpit with Chris Oyakhilome in Nigeria​
Evangelist Benny Hinn has announced that he will be visiting Nigeria for 3 powerful services tagged “Miracle Healing and Impartation Services” in Christ Embassy’s Loveworld Convocation Arena, Ikeja Lagos.
​Mar 7, 2016: Pirate Christian: Benny Hinn Waves Jacket at Hospital-Instantly Heals Everyone
In a display of great ingenuity and faith, Benny Hinn waived his jacket at a hospital yesterday and healed all of the patients inside.

​Mar 28, 2015: Charisma: Benny Hinn Released From California Medical Center
One week after checking in to an Orange County, California, medical center for atrial fibrillation, best-selling author and evangelist Benny Hinn was released Friday.
Mar 25, 2015: Flatimes: ​Pastor Benny Hinn Hospitalize
​Charismatic pastor/televangelist Benny Hinn, known for his popular international healing ministry and Pentecostal styled services was rushed to the hospital Friday upon returning from a trip to Brazil which resulted in a heart attack.
April 23, 2014: Challies: ​The False Teachers: Benny Hinn
​Hinn’s crusades are carefully constructed to lead and manipulate those in attendance, with singing and repetitive music that build a particular atmosphere and sense of anticipation. These crusades crescendo in a time where he announces that God has begun to heal people and he then invites those people to come to the stage to tell what God has done, a technique that was mastered by Kathryn Kuhlman and has since become a staple of faith healing. Hinn claims that God is working powerfully through him to heal others and begins to list those miracles, usually starting with ones that are invisible and unverifiable at the moment—diabetes, depression, and the like. As the healings begin, many people come forward, hoping for their own miracle. Generally, though, only people who claim to have already been healed are showcased on the stage where Benny speaks to them and then often “slays” them in the Spirit.
Apr 3, 2014: Apprising Ministries: LIBERTY UNIVERSITY PARTNERING WITH BENNY HINN?
That’s what well-respected Southern Baptist Tom Ascol, senior pastor of Grace Baptist Church and executive director of Founders Ministries, also thought based on his post Liberty University Partners with Benny Hinn.
​Feb 7, 2014: Grace To You: Has Benny Hinn Repented?
Michael Brown says I owe him an apology and correction.  In my previous post, “Ignorance is not an Option,” I quoted some tweets from Dr. Michael Brown in which he seemed to claim ignorance of the legion of controversies surrounding Benny Hinn as an excuse for recording five shows for Hinn’s This Is Your Day television program (four of which aired January 13-16).
July 24, 2010: ​Toronto Star: Married Toronto preacher Benny Hinn romantically linked to healer
​There’s a new televangelist soap opera.
Reports this week suggest a still-married Benny Hinn is now romantically involved with Paula White, another television preacher with a colourful past.
​Dec 28, 2002: ﻿﻿Religion News Blog: ﻿﻿Benny Hinn has millions of believers and millions in donations
Maybe you spotted him while you were channel surfing one night or maybe you were already tuned in. Either way, he’s hard to ignore. Benny Hinn — televangelist, faith healer, and appointment viewing for millions of believers. 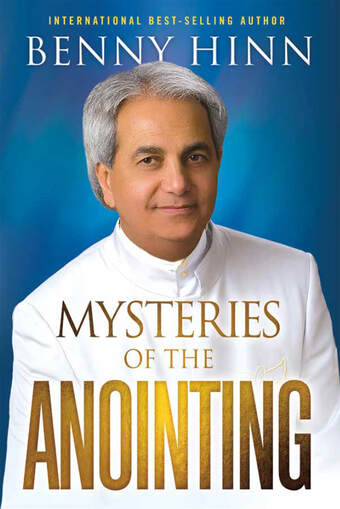 ​How can some ministers whose personal and spiritual lives are dried up and in shambles still operate in the anointing and continue to minister with power? Pastor Benny Hinn asked this question during a season of personal trial, and his quest led him to an in-depth understanding of the three “rivers,” or types, of anointing in Scripture: 1 John 2:27 (the anointing within you); Acts 1:8 (the anointing upon you); and Isaiah 10 (a global anointing related to building up and destroying nations).
In Mysteries of the Anointing, Hinn explores these three types of anointing, sharing personal stories of things he learned firsthand from Kathryn Kuhlman and Oral Roberts, as well as providing biblical and historical examples that illustrate his teachings. Readers will discover: