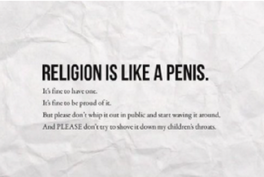 ​Crude...maybe funny if there are actually people who think they see a similarity. But, this is an example of the mentality of the anti-theist. And that is not a type-o. I did not mean to write atheist...I truly mean anti-theist. Atheism as a tenant implies a non belief in God. An anti-theist does not believe God and wants you to know you are an idiot if you do. They value no ones beleifs but their own.....and show contempt for any belief they do not share.

​Overheard: "It seems as though much of christian efforts in society isn't about "winning souls over for god" but forcing society to accept and follow their beliefs." Hmmmm,  my observation is  that "christian efforts" in society to "win souls" isnt gonna make the news. Once they step into the political realm then they are all over. 24 hours a day. 7 days a week. On multiple news channels. In the blogosphere  world wide both pro and con. When little "Jimmy" next door accepts Jesus as his "personal savior" because Johnny was a "faithful" witness no reporter is knocking on the door to get the scoop.................There is something I just don't get about the mind of an apostate: Why do they think they only started thinking when they left God?  ....................Is it possible to prove atheism? Is it possible to prove there is no God? Theoretically it is. One would have to have all knowledge of existence to say with certainty that there is no God. Obviously this is not achievable..........

"While atheists are sometimes un-persuaded by the arguments for God’s existence, they are still woefully unable to provide coherent and adequate answers to the most important questions of life related to the cause of the universe, the appearance of design, the origin of life, the reality of human free will and the existence of transcendent moral truth. Theists aren’t the only ones who have to answer these questions. If naturalism is true, naturalists have their own unique burden of proof." -J Warner Wallace​
Jan 25, 2022: Religion News Service: ​Secularism is not atheism. A new book explains why the distinction is so critical.
​In the United States, secularism has become synonymous with atheism. But that’s a big mistake, argues Jacques Berlinerblau, a Georgetown University professor.
At its core, secularism is an approach to governance, writes Berlinerblau in his new book, “Secularism: The Basics.” And critically, it is one many religious people, not just atheists and agnostics, support.

Nov 14, 2021: The Secular Web: ​Thinking and Unthinking Faith
​Ross Douthat is a conservative American writer. The present essay is a critique of an opinion piece by him published in the New York Times (Douthat, 2021). That article is an exemplar of several themes common in contemporary Christian apologetics, and merits analysis. 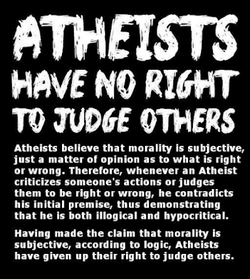 ​Excerpt from Thomistic Bent:
When I was debating this atheist, I asked him, ‘what would convince you there is a god?’ He said “If all the chairs in this room rose up, flew against the back wall, and spelled ‘I am here — God’ then I would believe there is a god.” I am not convinced he would believe if this happened. If he was consistent philosophically, his atheism would have some way of trying to account for it, that there is some type of natural law that we have not yet discovered. Why do I think this? Because they already do this in things they observe, like the DNA molecule.
Suppose that all the chairs did rise up and float against the back wall and spell out “I do exist — God” and this atheist does believe there is a god. Suppose then that he goes out and tells others that he believes there is a god. They ask him why, and he tells them about the chairs. Then the same thing happens to them….the chairs rise up and float against the back wall, and they believe there is a god. And so he goes out into the world and everywhere that he confronts an atheist, chairs rise up and float against the wall. Until finally, he tells a person that he believes in god, and the person asks why. He tells the person he believes because chairs rise up and spell things against the wall, saying that there is a god. The person then responds, ‘Oh, that happens all the time. That’s no evidence for god; that’s always happening.’
So the atheist complains that God is not giving enough miraculous evidence for His existence, but if you give enough evidence for His existence, they just take the abundance of that evidence and call it a natural event. Ask the atheist, ‘DNA has information. Do you think that at least shows there is an intelligence?’ They say, ‘No, DNA is a natural thing. It’s in everything.’ Thus if there is not enough evidence, the atheist complains, but if there is an abundance of evidence, they redefine the evidence and call it natural.