Feb 28, 2022: Christian Headlines: ​Chinese Court Sentences Female Pastor to 8 Years in Prison for Preaching the Gospel
A female pastor in China's Hubei province has been sentenced to eight years in prison on charges of "fraud for preaching the Gospel" after her house church refused to join the state-run church, which monitors and regulates Protestant churches.

The Conversation: ​Christian nationalism poses a threat to human rights in Ghana
​Ghana is a religious country. According to the 2021 census, about 71% of the population is Christian and 18% Muslim. Followers of indigenous or animistic religious beliefs make up another 5%, and 6% are members of other religious groups or don’t have religious beliefs.
Many Ghanaians regard Ghana as a “nation of Christians.”
The New Patriotic Party’s electoral slogan in 2016 and 2020 was: “For the battle is the Lord’s.” These are words David is said to have uttered when confronting Goliath in their biblical combat. The party’s electoral slogan referenced the Christian god and implied the party was fighting a holy battle in seeking the presidency and a parliamentary majority.
10.24.22

Mar 17, 2022: WND: ​Churches pack thousands of meals for Ukrainians impacted by Russian invasion
​ Four congregations based in Minnesota recently came together to pack around 100,000 meals for the needy, with half of them slated to be sent overseas to help those impacted by the Russian invasion of Ukraine.
Bethel Lutheran Church of Rochester hosted the meal-packing event last Saturday, with 250 volunteers packing the meals on behalf of Food for Kidz and the Channel One Regional Food Bank.
Mar 8, 2022: Christian Post: ​Did the prophet Ezekiel predict Russia’s invasion of Ukraine?
According to Pat Robertson, Vladimir Putin is being “compelled by God” to invade Ukraine. Indeed, “He went into the Ukraine, but that wasn’t his goal. His goal was to move against Israel, ultimately.” And, according to Robertson, this was all prophesied by Ezekiel, who lived more than 2,500 years ago. Is this true?
Mar 6, 2022: Christian Today: ​Churches converted into shelters to welcome Ukrainian refugees
Pews are being pushed aside in Polish churches to make room for people fleeing the war in Ukraine.
Mar 4, 2022: Christianity Daily: ​Ukrainian Priest Wants To Exorcise Evil Spirit Influencing Putin
A Catholic Byzantinian priest, Fr. Tikhon Sergey Kulbaka, announced on Facebook last Friday that he will initiate an exorcism on Russian President Vladimir Putin, whose Ukrainian invasion he believes to be inspired by the devil.
Mar 3, 2022: Chicago Catholic: Ukraine: no grave is large enough to contain the spirit of freedom
President Putin is turning cities to rubble, making life unlivable, and bombing civilians to kingdom come. The sacred Babyn Yar Holocaust memorial to the 33,000 Ukrainian Jews who were summarily slaughtered by the Nazis has been obliterated. Russian saboteurs stalk the streets dressed like farmers and street traders, shooting people randomly at point blank range. People are trapped in apartment blocks without food or water, barricaded in with mattresses and sofas. Children go to school in subways, and makeshift hospitals have been set up in underground car parks. A million refugees have fled the terrors, and a million more will follow. Scores of dogs have been tied up at train stations, abandoned by their owners faced with fight-or-flight and weren't permitted to take their treasured pets onboard. "This is Ihor, very gentle, please look after him."
Mar 3, 2022: ​Tablet: Prince of Wales pledges support on visit to Ukrainian cathedral
The Prince of Wales promised support for Ukrainian refugees from his charities on a visit to the Ukrainian Greek Catholic Cathedral in London.
Mar 3, 2022: Vatican News: ​Ukraine: “Please pray for us, that God may give us His peace!”
A Ukrainian volunteer working with the Order of Malta’s relief agency, Malteser International, in the western city of Lviv, speaks of humanitarian efforts underway to assist those who are fleeing, and asks for prayers.
Mar 3, 2022: Word & Way: ​Kyiv Shrines, Memorials with Powerful Symbolic Value at Risk
Among the sites at risk in the Ukrainian capital are the nation’s most sacred Orthodox shrines, dating back nearly 1,000 years to the dawn of Christianity in the region. The sites, along with other landmark shrines in Kyiv, are religiously significant to both Ukrainian Orthodox and Russian Orthodox. They also stand as powerful symbols in the quarrel over whether the two groups are parts of a single people — as Russian President Vladimir Putin has claimed — or are distinct but related Slavic nations.
Feb 26, 2022: Church Leaders: ​Greg Laurie Addresses ‘End Time’ Significance Following Russia’s Attack on Ukraine
​Harvest Christian Fellowship’s senior pastor Greg Laurie took on the question many Christians have been voicing about Russia’s unprovoked war on Ukraine and whether it relates to the End Times in Revelation.
“Is there any prophetic significance to what is happening in Ukraine right now and other events that are unfolding around the world?” Laurie asked. Then: “The answer is…Yes!”
Feb 26, 2022: CBN: ​Calls for Prayer Grow as Thousands Flee Ukraine Following Russian Invasion
As the crisis deepens, there have been a growing number of calls for prayer for Ukraine and its people - including on social media.
Feb 26, 2022: Charisma: ​Join Native Ukrainian Pastor, Russian Wife in Spirit-Filled Prayer for Their 2 Countries
​Pastor Vladimir Savchuk, born in the Ukraine, immigrated to the U.S. at the age of 13. Today, he leads HungryGen Church in Pasco, Washington, and hosts the Vlad Savchuk Podcast on the Charisma Podcast Network.
He and his wife, Lana, a native of Russia, hosted a special prayer time for their two countries this week. Their local paper once referred to the couple as "a house divided," but in Jesus, they are one.
Feb 26, 2022: Christian Post: ​Russia’s invasion of Ukraine: Christian groups Samaritan's Purse, World Help send relief to war victims
International Christian relief groups Samaritans’ Purse and World Help are standing alongside the Ukrainian Church to provide aid to victims as Russia’s full-scale military invasion of Ukraine enters into the third day Saturday with Russian troops storming toward Ukraine’s capital.

Nov 30, 2022: Christianity Daily: ​Christians Become a Minority in England, Raises Questions for Disestablishment of Church of England
​Questions about the position of church leaders in the House of Lords and the disestablishments of the Church of England rise as less people identify as Christians. The Guardian reported that a study stated that less than half of the population of England and Wales identify as Christians.
The ONS Census reported that there are 5.5 million fewer Christians from 2011 to today. The Muslim population grew from 2.7 million to 3.9 million.
Nov 30, 2022: Charisma: ​R.T. Kendall Not Surprised Christianity Has Become a Minority in UK
​According to Census 2021, Christianity has now become a minority in England and Wales. And pastor and author R.T. Kendall, who spent 25 years as the senior minister at Westminster Chapel in London, says it's only going to get worse.
The 2021 census revealed that only 46.2% of people identified themselves as Christians, compared with 59.3% of the population in the 2011 census, a 13-percentage point drop over the past decade.

UCA News: ​Christians, Muslims condemn bombing in the Philippines
​Christians and Muslims have deplored the bomb explosion on a bus that left one passenger dead and 11 injured in the southern Philippines.
The bomb went off inside an air-conditioned bus at a terminal in Sultan Kudarat province of Mindanao region on Nov. 6.
Among the injured nine are Muslims and two Catholics.
11.7.22 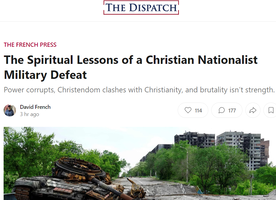 The Dispatch: ​The Spiritual Lessons of a Christian Nationalist Military Defeat
On February 24, the world’s most powerful Christian nationalist went to war, at the helm of what many people considered to be one of the world’s most potent militaries. Russian President Vladimir Putin spent more than two decades—exercising more power than any American president could ever hope to possess—forging church, state, and culture into an (allegedly) mighty instrument of raw, anti-woke national power. 10.9.22
Jan 20, 2022: Catholic Standard: ​Ukrainian crisis threatens peace and democracy in Europe, observers warn
Ukrainian-American Catholics warn a Russian military buildup on Ukraine’s border poses a grave threat not only to that nation, but to Europe and democracy itself.

Jan 23, 2022: New York Times: ​‘Now There Is No One’: The Lament of One of the Last Christians in a Syrian City
Michel Butros al-Jisri is among the few Christians left from a once-vibrant community in Idlib on the brink of disappearing. The city, in the only territory in Syria still controlled by rebels, is ruled by Islamists.

Alistair's Adversaria: ​The Death of the Queen and a Christian Understanding of Sovereignty 9.12.22