Dec 30, 2022: Ministry Watch: ​An Interview with Rick Warren
​For most people who have been around evangelicalism over the past 40 years, Rick Warren needs no introduction.  He and his wife Kay founded Saddleback Church, in Orange County, California, and it has become one of the largest and most influential churches in the nation.
Rick Warren’s 2002 book “The Purpose Driven Life” has sold more than 50-million copies, making it one of the best-selling books of all time.
Dec 17, 2014: Berean Call: Rick Warren on Roman Catholicism: "We have more in common than what divides us"
Warren, whose Purpose Driven Life and Purpose Driven Church books have sold millions of copies around the world, recorded a video interview for the Catholic News Service in which he said: "We have far more in common than what divides us."
Aug 15, 2014: Bartholomews Notes on Religion: Rick Warren Announces “All Africa Purpose Driven Church Continental Congress” For Rwanda
At the Washington Post, Joann Weiner asks “Does Rwanda’s economic prosperity justify president Kagame’s political repression?“:
May 15, 2014: Faith Forward: Christianity Must Lose Its Dualism (What Rick Warren Could Learn from Rob Bell)
Bell’s progressive Christian perspective is, of course, nothing new, but he is the first mega-church pastor (as far as I know), educated in and emerging from an evangelical exclusive and dualistic tradition and having grown beyond that tradition, who has had the courage to publicly proclaim a more inclusive, holistic vision.

May 9, 2014: Apprising Ministries: Rick Warren endorsing Catholics Come Home
I also happen to be a pastor within the Southern Baptist Convention, for now, just as is Purpose Driven Pope Rick Warren. Should the Lord sustain me, I have every intention of doing all I can to help arouse God’s soldiers into fighting this onslaught of Roman Catholicism and to expose these apostates wherever I may find them.
Mar 28, 2014: Huffington Post: Rick And Kay Warren Launch Saddleback Church Mental Health Ministry After Son's Suicide
Every day since his son Matthew died from a self-inflicted gunshot wound nearly a year ago, Pastor Rick Warren of Saddleback Church has found himself in tears.
Mar 24, 2014: Political Research Associates: Only Fools Believe? Pastor Rick Warren and Global Homophobia
The recent passage of highly punitive anti-LGBTQ legislation in Nigeria, Uganda, and Russia has brought renewed media scrutiny to certain conservative American evangelicals known for campaigning against homosexuality abroad. Pastors Scott Lively and Rick Warren – in particular – have been called out for creating the conditions that led to Uganda’s infamous Anti-Homosexuality Act.

Mar 14, 2014: Christian Post: Rick and Kay Warren to Host 'Mental Health and the Church' Summit; Organizers Hope to Wipe Out Stigma of Mental Illness
Pastor Rick Warren and his wife, Kay, of Saddleback Church, will be joined by several experts in the field of mental health, and the National Alliance on Mental Illness-Orange County to host The Gathering on Mental Health and the Church later this month.
Apr 14, 2013: Publius Forum: Pastor Rick Warren, Gun Control, and Matthew Warren’s Suicide
Pastor Rick Warren and his family suffered a devastating loss last week when their son, Matthew, took his own life with a pistol that he may have bought illegally from a person he contacted over the Internet. Dealing with such a loss is heartrending, of course, and the Warren family has much to endure as they deal with this terrible incident. But one thing is sure, new gun laws would not have prevented Matthew Warren’s suicide.

Mar 31, 2014: Pastor Rick Warren has challenged millions of individuals over the past two decades to live a “Purpose Driven Life,” but now he’s posing a new challenge to churches: Get educated and work together to confront mental health issues.
Warren, who pledged to take mental illness up as a new ministry focus following his son Matthew’s suicide last year, hosted “The Gathering on Mental Health and the Church” at his Saddleback Church in Lake Forest, Calif., Friday. The one-day conference lasted more than 12 hours and was aimed at pinpointing faith-based strategies to take up mental health while also offering an educational opportunity for church leaders.
“I’m not an authority on mental illness, but I am an authority on living with mental illness,” Warren said. “We wanted to pull back the curtain and say, ‘It’s OK. I’m not OK, you’re not OK, but that’s OK because God’s OK.’”
Warren was also joined by his wife, Kay Warren; Bishop Kevin Vann of the Roman Catholic Diocese of Orange; and by the National Alliance on Mental Illness in co-hosting the initiative. (SOURCE: Mar 31, 2014:  Billy Hallowell: The Blaze: "Pastor Rick Warren’s Major Challenge to Churches")
Mar 8, 2014: Eight days before the anniversary of their son's death, the Warrens launched a new chapter in their ministry. The Conference on the Church and Mental Health, a daylong event at the church's main Lake Forest, Calif. campus that will be broadcast online, has amassed 3,000 registrations and features a lineup of pastors, academics and psychiatrists hosting panels and prayers to tackle the stigma of mental illness and suicide in the church. Warren's Saddleback Church has teamed with Bishop Kevin Vann of the Roman Catholic Diocese of Orange and the National Alliance on Mental Illness-Orange County to host, is the first step in what will be a long-term campaign to launch discussions of mental health in pulpits and pews across the U.S. Friday's workshops include "Christianity and Depression," "How to Launch a Support Group and Counseling Ministry in your Church," "Suicide Prevention: Saving Lives One Community at a Time" and "Food and The Body: Three Steps to Healing Eating Disorders through Community." (SOURCE: Mar 28, 2014: Jaweed Kaleem: Huffington Post: "Rick And Kay Warren

​Mar 18, 2014: Top 10 Fittest Christian Leaders List Includes: 7. Pastor Rick Warren
"Warren had an epiphany one day while he was baptizing 858 people. After dipping the 500th body into the water, he thought 'we're all fat.' That triggered him to create a health program with leading experts such as Dr. Oz that Christians could follow. He also wrote the book, "The Daniel Plan," which Warren lost over 30 pounds by following," said Becic. [SOURCE: Mar 18, 2014: Jessica Martinez: Christian Post: "Top 10 Fittest Christian Leaders List Includes Joel Osteen, Rick Warren")

Feb 9, 2012: Life News: Pastor Rick Warren: I’d Rather Go to Jail Than Obey Mandate
Evangelical pastor Rick Warren sent a message on Twitter today that is resonating with pro-life advocates opposed to the new Obama mandate forcing religious employers to pay for birth control and abortion-causing drugs.
​Apr 5, 2010: Tim Challies: Why John Piper Should Not Have Invited Rick Warren
So John Piper has asked Rick Warren to speak at this year’s Desiring God National Conference, Think: The Life of the Mind and the Love of God. You may have heard about this, either through buzz in the blogosphere or even from Piper himself in his recent Ask Pastor John session
Jan 15, 2009: Huffington Post: Follow Jesus Like Nazis Followed Hitler, Rick Warren Tells Stadium Crowd
On April 17, 2005, at the southern California Anaheim Angels sports stadium thirty thousand Saddleback Church members, more than ever gathered in one spot, assembled to celebrate Saddleback's 25th anniversary and listened as Rick Warren announced his vision for the next 25 years of the church: the P.E.A.C.E. Plan.

​Sept 29, 2008: Christopher Hitchens: Shame on You, Rick Warren
Still more reasons to boot the huckster of Saddleback from the inauguration.
Sept 12, 2005: New Yorker: The Cellular Church
On the occasion of the twenty-fifth anniversary of Saddleback Church, Rick Warren hired the Anaheim Angels’ baseball stadium. 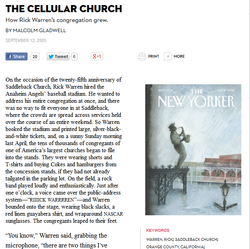 ​Z-News Notes: Sept 12, 2005: At Saddleback, members are expected to tithe, and to volunteer. Sunday-school teachers receive special training and a police background check. Recently, Warren decided that Saddleback would feed every homeless person in Orange County three meals a day for forty days. Ninety-two hundred people volunteered. Two million pounds of food were collected, sorted, and distributed.
It may be easy to start going to Saddleback. But it is not easy to stay at Saddleback. “Last Sunday, we took a special offering called Extend the Vision, for people to give over and above their normal offering,” Warren said. “We decided we would not use any financial consultants, no high-powered gimmicks, no thermometer on the wall. It was just ‘Folks, you know you need to give.’ Sunday’s offering was seven million dollars in cash and fifty-three million dollars in commitments. That’s one Sunday. The average commitment was fifteen thousand dollars a family. That’s in addition to their tithe. When people say megachurches are shallow, I say you have no idea. These people are committed.” (SOURCE: Sept 12, 2005: Malcolm Gladwell: Mother Jones: "The Cellular Church")