Feb 28, 2022: Randy Alcorn: ​Finding Happiness in Christ Is Not Automatic
Feb 17, 2022: Relevant Magazine: Does God Really Want Everyone to Be Happy?
In the words of Randy Alcorn, author and director of Eternal Perspective Ministries, “We should be grateful when God grants us health, provisions, and delightful surprises. But it’s one thing to be happy when such things occur, and another to believe God has failed us when they don’t.”

December 18, 2021:
I came across this article this morning written last week by one of my favorite authors, Randy Alcorn:
In the 52 years I’ve known Jesus, I’ve witnessed countless conflicts between believers. But never more than in the last year. Many have angrily left churches they once loved. Believers who formerly chose churches based on Christ-centered Bible teaching and worship now choose them based on non-essential issues, including political viewpoints and COVID protocols.
Churches are experiencing a pandemic of tribalism, blame, and unforgiveness—all fatal to the love and unity Jesus spoke of. Rampant either/or thinking leaves no room for subtlety and nuance. Acknowledging occasional truth in other viewpoints is seen as compromise rather than fairness and charitability.
Sadly, evangelicals sometimes appear as little more than another special-interest group, sharing only a narrow “unity” based on mutual outrage and disdain. This acidic, eager-to-fight negativity highlights that we have no right to expect unbelievers to be drawn to the good news when we obsess about bad news and treat brothers and sisters as enemies. 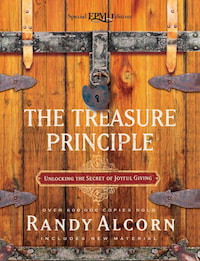 BOOKS ON THE RECORD: May 11, 2014: Since 1985 Alcorn has written many books, but none have been more popular than The Treasure Principle which was published in 2001. Released with little fanfare and with only three brief endorsements (including John Piper’s who says, “Supercharged with stunning, divine truth! Lightning struck over and over as I read it.”) the book claims to “unlock the secret of joyful giving.” The “treasure principle” is this: You can’t take it with you—but you can send it on ahead. Alcorn says, “If we give instead of keep, if we invest in the eternal instead of in the temporal, we store up treasures in heaven that will never stop paying dividends. Whatever we store up on earth will be left behind when we leave. Whatever treasures we store up in heaven will be waiting for us when we arrive.” Along with the principle he offers six keys:

Principle #1 - God owns everything. I’m His money manager. Principle #2 - My heart always goes where I put God’s money. Principle #3 - Heaven, not earth, is my home. Principle #4- I should live for the dot but for the line [not for this short life on earth but for eternity] Principle #5 - Giving is the only antidote to materialism. Principle #6 - God prospers me not to raise my standard of living, but to raise my standard of giving. (SOURCE: Tim Challies: "The Bestsellers: The Treasure Principle ")
Feb 27, 2012: Creation.com: An eternal perspective on creation
Lita Cosner chats with Randy Alcorn, writer and founder of Eternal Perspective Ministries
​Oct 8, 2010: Good Question Have Groups Talking: Pets in heaven? (Randy Alcorn)
Humorist Will Rogers said, “If there are no dogs in heaven, then when I die I want to go where they went.” This statement was, of course, based on sentiment, not theology.
Apr 1, 2003: Christianity Today: The Pastor without a Paycheck
Randy Alcorn learned to live what he had preached while fleeing the wrath of abortionists and the judgment of the courts