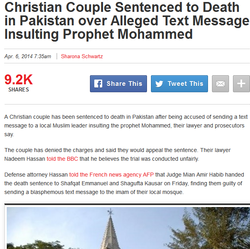 Religion On the Record:
A Christian couple has been sentenced to death in Pakistan after being accused of sending a text message to a local Muslim leader insulting the prophet Mohammed, their lawyer and prosecutors say.
The couple has denied the charges and said they would appeal the sentence. Their lawyer Nadeem Hassan told the BBC that he believes the trial was conducted unfairly.
Defense attorney Hassan told the French news agency AFP that Judge Mian Amir Habib handed the death sentence to Shafqat Emmanuel and Shagufta Kausar on Friday, finding them guilty of sending a blasphemous text message to the imam of their local mosque.
The imam, Maulvi Mohammad Hussain, of the local mosque in Gojra – a town with a history of violence against Christians – filed the complaint against them last July, accusing them of sending him the text message which he characterized as insulting to the Prophet Mohammed. (SOURCE: Apr 6, 2014: Sharona Schwartz: The Blaze: "Christian Couple Sentenced to Death in Pakistan over Alleged Text Message Insulting Prophet Mohammed") 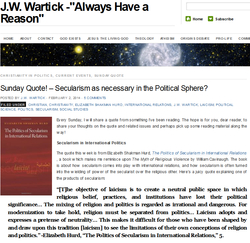 ​Feb 3, 2014: .JW Wartick (JW Wartick "Always Have a Reason") shared "Sunday Quote! – Secularism as necessary in the Political Sphere?" He writes: The quote this week is from Elizabeth Shakman Hurd, The Politics of Secularism in International Relations, a book which makes me reminisce upon The Myth of Religious Violence by William Cavinaugh. The book is about how secularism comes into play with international relations, and how secularism is often turned into the wielding of power of the secularist over the religious other. Here’s a juicy quote explaining one of the products of secularism:
“[T]he objective of laicism is to create a neutral public space in which religious belief, practices, and institutions have lost their political significance… The mixing of religion and politics is regarded as irrational and dangerous. For modernization to take hold, religion must be separated from politics… Laicism adopts and expresses a pretense of neutrality… This makes it difficult for those who have been shaped by and draw upon this tradition [laicism] to see the limitations of their own conceptions of religion and politics.” -Elizabeth Hurd, “The Politics of Secularism in International Relations”

​Sept 9, 2014: NCFIC: Raising Boys and Girls to Be Missionaries - Paul Washer
Here is a transcript of a really good message given by Paul Washer titled during the White Unto Harvest Conference. The message is titled: "Raising Boys and Girls to Be Missionaries."
July 12, 2014: Youtube: Biblical Tests of True Faith - Paul Washer
It would be easier for a camel to pass through the eye of a needle than it would be for someone to pass through to heaven with a shred of self-righteousness upon them.
July 11, 2014:  A True Church: Paul Washer, A Passionate Impostor
Paul Washer is a slick one. For those who can see the prevailing Satanic false Christianity of today (2 Timothy 3:1-5; 4:3-4), he is readily manifest; for Washer is engulfed in it. But those caught in that broad way (Matthew 7:13-23) are sadly deceived by Washer and the likes. Please don't be. Washer may be passionate, but the passion is for a false way (Psalm 119:104, 128).
Mar 3, 2014: Stand For the Faith: The Gospel According to Paul Washer Pt2 – The Gospel’s Power and Message
We have begun our look at Paul Washer’s book The Gospel’s Power and Message.  Let’s see if it gets any better from here.
Feb 22, 2014: Stand For the Faith: The Gospel According to Paul Washer Pt1 – The Gospel’s Power and Message
Paul Washer is a popular name among those who support a Reformed gospel.  Many have read his books or heard his preaching. The thing is, is Paul Washer giving us the true gospel message?
July 29, 2013: Tim Challies: An Interview With Paul Washer
You probably know Paul Washer as the man who preached the infamous “Shocking Youth Message,” a sermon that has tallied over one million views on YouTube.
May 3, 2010: Jays Analysis: Paul Washer is a False Prophet
I was, for several years, a huge fan and follower/disciple of Paul Washer.  I thought he was a godly leader: a real missionary, and a true “reformer.” I had several of his sermons on tape and, in fact, made copies of his tapes and distributed them to my fellow college students who needed to hear the “true Gospel of God’s grace.” I met him and spoke with him on theology several times. However, I was on a Path that Paul Washer was not on.
​Nov 25, 2006: Youtube: Paul Washer - Shocking Message (full length)
This is a Shockingly Powerful & Biblical message preached to about 5,000 youth in a day when youth are appealed to through shallow and worldly means.

“The former president’s son,” Wehner writes, “has a message for the tens of millions of evangelicals who form the energized base of the GOP: the scriptures are essentially a manual for suckers. The teachings of Jesus have ‘gotten us nothing.’ ”
- Peter Wehner, evangelical Christian & former adviser to President George W. Bush

Sept 23, 2022: ​Camera UK: JUSTIN WELBY’S ACCUSATION AGAINST ISRAEL CONTINUES TO UNRAVEL
Since the publication of an op-ed in The Times just before Christmas co-authored by Justin Welby, Archbishop of Canterbury, accusing Jews of driving out Christians from the Holy Land, we’ve argued that Welby provided no evidence to back up that broad allegation, or his specific claim that there’s been frequent assaults on Christians by such radical Jews.
Jan 11, 2022: Christian Today: ​Justin Welby says he's 'not personally in favour' of vaccine mandates
Justin Welby has been one of many Church leaders encouraging people to get vaccinated against Covid-19 but he is not in favour of making it a legal requirement.
Sept 16, 2021: ​Archbishop of Canterbury: Church of England to go net-zero by 2030
Sky News published this video item, entitled “Archbishop of Canterbury: Church of England to go net-zero by 2030” – below is their description.
The Archbishop of Canterbury, Justin Welby, has got rid of his diesel car and reduced his meat consumption. He says these are some of the small steps he has taken in support of climate action, but ‘it can’t be up to the individual.’
Apr 10, 2015: Christian Today: Justin Welby to persecuted Christians: 'God feels our suffering, our horror, our sadness'
In an interview with SAT-7's Imed Dabbour, Justin Welby described the situation in Iraq and Syria as "the worst...that has been faced for centuries". He referenced Catholic Patriarch Louis Raphael Sako, who said last year that Christians were facing the worst treatment since the invasion of Genghis Khan.

Dec 17, 2021: Because of Them We Can: ​Historic Virginia Church Creates ‘VERSES’ Bible Based Trivia Card Game
The historical Alfred Street Baptist Church, located in Alexandria, Virginia, which traces its history back to the early 1800s, has now entered into the world of gaming. The game was inspired by Pastor Howard-John Wesley, who alongside his ministerial team and creative producer, were looking for a way to make creating Bible study lessons easier while Wesley was in his PhD program during the pandemic. That’s when they decided to create a Bible based trivia game show entitled “VERSES.”
​Apr 6, 2015: Christian Post: Obama Family Attends Prominent African-American Megachurch for Easter; Pastor Touches on Questions of Same-Sex Marriage, Healthcare, Resurrection of Christ
President Barack Obama and his family attended the prominent Alfred Street Baptist Church in Alexandria, Virginia, on Easter Sunday. The pastor, Rev. Howard-John Wesley, touched on a number of social issues in his sermon, including same-sex marriage, healthcare, and the resurrection of Christ.

March 22, 2022: PR Newswire: ​Media Mogul Byron Allen Added as a Featured Speaker at 2022 Business & Leadership Conference Presented by Dr. Bill Winston
Mr. Allen will present at the conference alongside Dr. Bill Winston, conference host, founder and senior pastor of Living Word Christian Center and founder of Joseph Business School; Dr. Valerie Daniels-Carter, president and CEO of V&J Foods, Holding Companies, Inc., the largest female-owned franchise organization in the country; Rodrigo Azpurua, founder and CEO of Riviera Point Development Group; Terri Savelle Foy,
Oct 21, 2022: Forest Park Review: Living Word now operating Living Fresh Market
Melody Winston, the daughter of Living Word founder Rev. Bill Winston, was traveling but confirmed the transaction in an email.
A man is beaten by robbers and left for dead by the side of the road. Two religious men pass by at different times, but never stop to help. A third man comes by, bandages his wounds, and takes him to an inn. He asks the innkeeper to care for him until he returns, promising to pay for all expenses. The third man was a Samaritan.
Jesus ends the story by asking who was the neighbor to the man left for dead by the side of the road. Interestingly, back in Jesus’ day, Samaritans were considered anything but “good.” This hostility had existed for generations.
I believe Jesus was teaching that your neighbor is not just the person who lives next door or from your same “tribe,” political party or social group. They may not look like you, talk like you or even believe like you. Your neighbor is anyone who needs God’s love and grace, and that definition includes everyone on the planet. -Bill Winston;Fox News 11.22.21
July 14, 2020: Forest Park Review:  FP businesses benefit from PPP loans
​Nonprofits benefiting from the loans include three related organizations: Bill Winston Ministries, Living Word Christian Center, and The Joseph Center. Other local nonprofits listed are Sarah's Inn and Chicago Inner-City Business Development out of 819 Marengo Ave. All received loans in the $150,000 to $350,000 range, except for Living Word Christian Center, whose loan was in the $1 million to $2 million range
​Dec 8, 2019: Premium Times: ​Pastor Fatoyinbo To Host Matthew Ashimolowo, Mensa Otabil, Tudor Bismark, Others at 12DG 2020
​12DG 2020 will feature impactful sessions from prominent speakers such as Pastor Matthew Ashimolowo, Dr Mensa Otabil, Dr Bill Winston, Bishop Tudor Bismark, Dr Jasmin Sculark and Reverend Marissa Farrow.
​Feb 20, 2013: AskDrO:  Mega-Church Pastor Bill Winston Loses his Chicago Bank
The Chicago saints are out of a lot of money now that bank regulators have closed down Covenant Bank, formerly operated by mega-church pastor Bill Winston. According to Black Media Scoop, the Federal Deposit Insurance Corporation made it known that “Liberty Bank & Trust Co., an African-American-owned bank in New Orleans, assumed $58 million in Covenant Bank assets and $54 million in deposits” from Winston’s bank.

Jan 14, 2022: Church Times: ​Philip Yancey: how I survived my brutal Christian childhood
His memoir Where the Light Fell took him three years to write, and a draft in 2015 was more than twice as long as the book that was finally published at the end of last year. It reads like the best of fiction, Angela’s Ashes, say, or Oranges Are Not the Only Fruit. It is searing and sensory, brutally honest, and frequently humorous: the story of an impoverished childhood and youth in a fundamentalist church, dominated by fear of hellfire and a wildly unpredictable mother

Nov 19, 2015: True Discernment: 10 Serious Problems with Jesus Calling
​
Sarah Young’s Jesus Calling is a phenomenon that shows no signs of slowing down. According to publisher Thomas Nelson, it “continues to grow in units sold each year since it was released [and] has surpassed 15 million copies sold.”