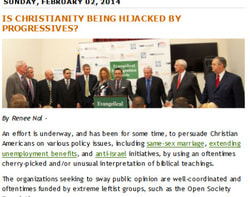 ​ON THE RECORD: Feb 2, 2014: Renee Nal (Illinois Review) asks "Is Christianity being hijacked by progressives?" Nal wisely notices that "An effort is underway, and has been for some time, to persuade Christian Americans on various policy issues, including same-sex marriage, extending unemployment benefits, and anti-Israel initiatives, by using an oftentimes cherry-picked and/or unusual interpretation of biblical teachings." Nal says "The organizations seeking to sway public opinion are well-coordinated and often times funded by extreme leftist groups, such as the Open Society Foundation." Napp Nazworth of the Christian Post discussed one of those efforts: “Evangelical leaders supporting immigration reform praised the new set of principles on immigration reform released by House Republicans after their winter meeting.” The “Evangelical Immigration Table” leaders “hail from the left and right of the political spectrum,” Nazworth wrote, “including leaders of Focus on the Family, National Association of Evangelicals, Sojourners and the Southern Baptist Convention’s Ethics and Religious Liberty Commission.”-------------
Adrian Warnock: How Progressive or Liberal Christianity destroys the Church
American Unitarian Conference: When Liberal Christianity Becomes Too Liberal
Daily Beast: Can Nadia Bolz-Weber Resurrect Liberal Christianity?
Essential Christianity: A History of Evil Liberalism in the Southern Baptist Denomination
Huffington Post: The Problem With Assuming Liberal Christians Hate the Bible
NBC News: Is liberal Christianity signing its own death warrant?
Religion Online: The Future of Liberal Christianity
Right Scoop: Are liberal ‘Christians’ leading homosexuals into hell? Read this before you decide being gay is not a sin
The Atlantic: The Rise of the Christian Left in America

Mar 6, 2014: Christianity Today: The Atonement and the Suffering Servant: Isaiah 53 by Philip Nation
This week, Philip Nation, Teaching Pastor at The Fellowship and Director of Adult Ministry Publishing at LifeWay Christian Resources, looks at the atonement in Isaiah 53.

​​Jan 25, 2015: Huffington Post: Baptist Megachurch Minister In Hot Water Over Comments On Ten Commandments
In his Christmas Eve message, Senior Pastor Perry Noble of NewSpring Church, which regularly has more than 32,000 worshippers at 11 campuses across South Carolina, told congregants that no word for “commandment” exists in Hebrew, the Old Testament’s original language.
​Sept 16, 2014: FBC Jax Watchdogs: Perry Noble and NewSpring Kick-Off the Tithing Season with Parody of Themselves!!
Below is a parody video that NewSpring Church has posted on their website to introduce Perry Noble's new sermon series entitled "The Church Just Wants Your Money". Some of the "best" (i.e. worst) teachings on money in mega churches come in September/October, so we are glad to see Perry is kicking things off with a bang! (The all time best/worst was Ed Young's tithing long bomb back in 2010 here and here.)