March 4, 2008: Huckabee withdrew from seeking the candidacy as it became apparent he would lose in Texas, where he had hoped to win, and that John McCain would get the 1,191 delegates required to win the Republican nomination.
May 14, 2011; Huckabee announced on his Fox News show that he would not be a candidate for the GOP presidential nomination in 2012. 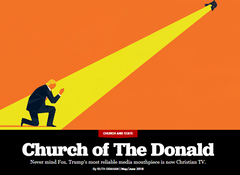 ​May/June 2018: Politico: Church of The Donald
The Music City campus of the Trinity Broadcasting Network is about a half-hour drive from Music City itself, in a placid Nashville suburb on a bend in the Cumberland River where the main road through town is called the Johnny Cash Parkway. TBN, America’s largest Christian television network, acquired the complex in 1994 after the death of country singer Conway Twitty, who had operated it as a sprawling tourist attraction he called Twitty City. Last year, TBN renovated Twitty’s personal auditorium, leveling the floor, adding large neon signs and a faux-brick backdrop under the original Corinthian columns. The resulting TV set looks like an urban streetscape framed by a Greek temple.
On a February night, in his large office just above the auditorium, the network’s biggest star is making last-minute plans for what’s shaping up to be a busy evening. First, Mike Huckabee fields some logistics for dinner at his nearby condo, where he will host three couples who won the privilege in a charity auction. He takes a call from the actor Jon Voight, who tells Huckabee he is free to do an interview about Israel. (Huckabee leaves the next day for Jerusalem, where TBN opened another studio a few years ago.) He checks with one of his producers about an old “Laugh-In” clip Huckabee had requested. “We aren’t paying $6,500 for it, good gosh!” he laughs when he hears the cost of the snippet. “Did they point a gun at your head and wear a ski mask when you asked that?” (They decide not to use it.)