​​Jan 22, 2016: Wartburg Watch 2016: Washingtonian Magazine Spotlights C.J. Mahaney, CLC, SGM
It's hard to believe that it's been almost seven years since Dee and I went to hear C.J. Mahaney speak at a Sovereign Grace Church in our area.
​​Sept 16, 2015: Wartburg 2015: Brother CJ Mahaney: He’s Done Gone and Joined the Southern Baptists!
One of the advantages of blogging for years is that we get to see stories evolve. Through the years, we have followed the Sovereign Grace Ministries (now Sovereign Grace Churches) debacle. We heard the horrific allegations of child sex abuse and watched as this once thriving organization took a nosedive, losing both churches and money.
Mar 8, 2015: SGC: Setting the Sadducees Straight | C.J. Mahaney | Mark 12:18-27
Oct 27, 2014: Wartburg Watch: Jon Payne Adores C.J. Mahaney – Guest Post by Todd Wilhelm
Dee and I are honored to feature the writings of our friend Todd Wilhelm from time to time.  It has been a while since we have focused on Sovereign Grace Ministries (SGM), so here is the latest concerning Sovereign Grace Church Louisville, where C. J. Mahaney serves as senior pastor. ​
Oct 12, 2014: Brent Detwiler: Executive Director Mark Prater Effectively Calls Victims of Sexual Abuse Liars on Behalf of All Sovereign Grace Leaders
Mark Prater is the Executive Director for Sovereign Grace Churches, formerly Sovereign Grace Ministries.  Yesterday, he put out a statement declaring all the accusations in the civil lawsuit against C.J. Mahaney, John Loftness and Gary Ricucci were untrue.  This was not based upon any presentation of facts or refutation of evidence.
​​May 22, 2014: Christianity Today: Tullian Tchividjian on CJ Mahaney and the Sovereign Grace Ministries sex abuse scandal: 'Of course he knew'
Nathaniel Morales, now 56, was convicted on May 15 this year of sexually abusing three underage boys between 1983 and 1991 during his time as youth pastor at Covenant Life. Sovereign Grace is a coalition of 80 Reformed evangelical churches. 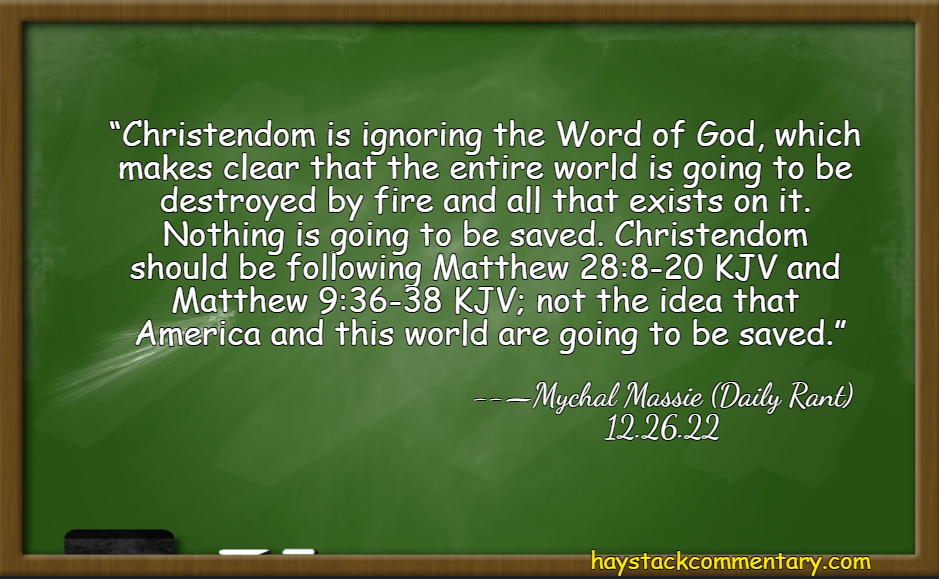 ​Joslin "Josh" McDowell (born August 17, 1939) is an evangelical Christian apologist and evangelist. He is the author or co-author of over 150 books.

In 2006, his book Evidence That Demands a Verdict was ranked 13th in Christianity Today's list of most influential evangelical books published after World War II. Other well-known titles are More Than a Carpenter, A Ready Defense and Right from Wrong.. 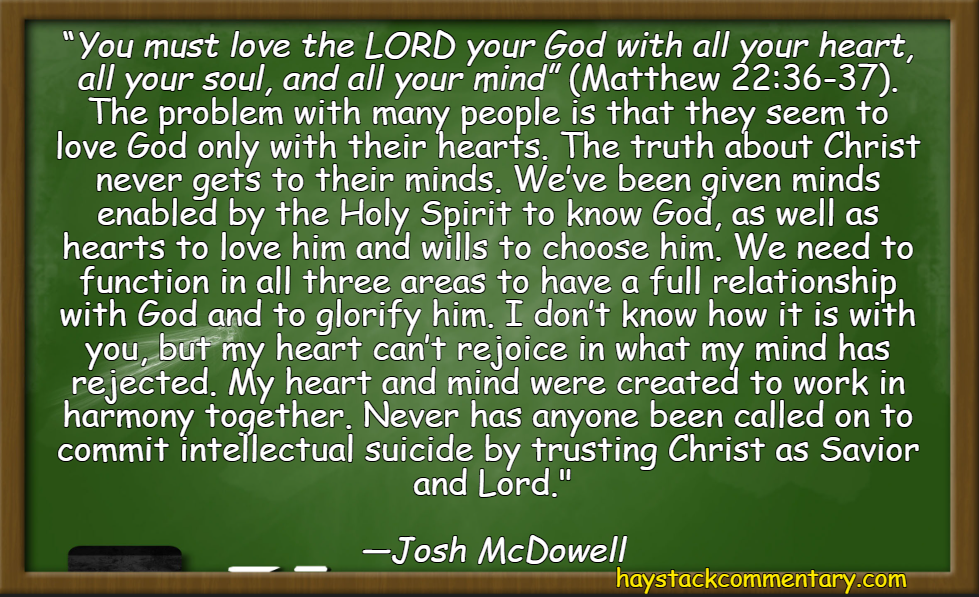 ​Aug 4, 2021: Capstone Report: Guy who attends Woke J.D. Greear’s church sides with Wokesters in attack on Voddie Baucham.
​The allegation of plagiarism and misattribution arose from Woke Joel McDurmon. And as you can see in that Twitter thread, the Woke delusion is strong with McDurmon. He slandered Samuel Sey.
Mar 16, 2015: American Vision: Larry Pratt interviews Joel McDurmon on the new book: The New England Pulpit and the American Revolution
Joel McDurmon was interviewed by Larry Pratt,--Executive Director of Gun Owners of America—on his new book, The New England Pulpit and the American Revolution: When American Pastors Preached Politics, Resisted Tyranny and Founded a Nation on the Bible.
Joel McDurmon, Ph.D. in Theology from Pretoria University, is the Director of Research for American Vision. He has authored seven books and also serves as a lecturer and regular contributor to the American Vision website. He joined American Vision's staff in the June of 2008. Joel and his wife and four sons live in Dallas, Georgia.

Jan 10, 2023: Christian Post: ​‘I’m almost afraid to hand you this,’ Pastor James Meeks says in handing over megachurch to Charlie Dates
Founding pastor of the 10,000-member Salem Baptist Church of Chicago, James Meeks, said he was “almost afraid” to hand over the reins of the congregation he led for the last 38 years to Pastor Charlie Dates. In an emotional retirement ceremony Sunday, he revealed he is trusting God to give his spiritual son the strength he needs to carry on the ministry.

Jan 10, 2023: Baptist News Global: ​The New Apostolic Reformation drove the January 6 riots, so why was it overlooked by the House Select Committee?
Ana Mendez, who was considered a prophet, claimed she had a vision that a demon known as the Queen of Heaven had an ice castle on Mount Everest and God was calling her to go to Everest for spiritual battle. Wagner believed her vision and supported the trip. So in 1997, a group of 26 prophetic intercessors spent three weeks doing spiritual warfare on Mount Everest in “Operation Ice Castle.”
​While some of the team stayed at the Everest View Hotel to pray at 13,000 feet, and others ascended to the Everest Base Camp at 18,000 feet, Wagner wrote in his book Confronting the Queen of Heaven that Ana’s team “which had taken professional alpine training in Mexico and Peru before leaving, scaled the ice cliffs and crossed bottomless crevasses, climbing to 20,000 feet.”
“Our assignment from God was to take down the foundations of The Great Babylon, the harlot over many waters, which supported the false religious systems of the world,” Ana said. “He clearly showed us where we should go for our prophetic act by revealing a large, brown stone formation, completely surrounded by walls of ice resembling a castle, and shaped exactly like an idol of the Queen of Heaven. This seat of the Mother of the Universe was 20,000 feet high, and to get there we had to cross the ice fall, the most dangerous part of the Everest ascent, with no guide but him and no help from other than angels.” 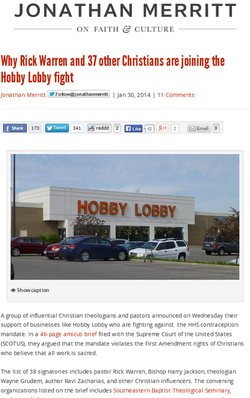 Dec 15, 2022: NRB: ​Media Roundup: NRB CEO Joins Newsmax, Todd Starnes Show, and Victory Channel to Talk “Respect for Marriage Act”
On Tuesday, December 13, NRB President & CEO Troy A. Miller joined Todd Starnes to discuss President Joe Biden’s signing of the so-called “Respect for Marriage Act.”
​FOR IMMEDIATE RELEASE:
December 13, 2022
FOR INFORMATION CONTACT:
Noelle Garnier
202-891-7843
ngarnier@nrb.org
WASHINGTON, D.C. (NRB)—The National Religious Broadcasters (NRB) association—a nonpartisan, international association of Christian communicators whose member organizations represent millions of listeners, viewers, and readers—has issued the following statement in response to President Joe Biden’s signing into law the Respect for Marriage Act today.
The statement is from Troy A. Miller, President & CEO of the National Religious Broadcasters:
“The Respect for Marriage Act is a reaction to a fabricated problem that does not exist. The ability to obtain a same-sex marriage is not in jeopardy in America today, and this bill does nothing to change the legal status of same-sex marriage anywhere.
“However, the ability to do business or speak in the public square while holding to traditional values about life, marriage, and family is very much under threat. These are part and parcel of the First Amendment freedoms that NRB exists to defend.
“The Respect for Marriage Act puts faith-driven Americans in legal jeopardy for practicing their beliefs, and instead ‘greenlights’ the interests of radical activists seeking to penalize and bring harm to those who dissent from their views. This exposes Christian social service groups and other entities to predatory litigation with a broad ‘private right of action’ clause and jeopardizes the ability of religious nonprofits to obtain charitable, tax-exempt status from the IRS.
“Tragically, some faith-based organizations signed onto this bill based on the illusion that their rights and freedoms will be protected. Over time, it will become clear they were mistaken. We will continue to fight for our First Amendment freedoms, despite this significant setback today.”

Jan 30, 2015: Christian Post: Evangelical Gracepointe Church Comes Out in Support of Gay Marriage; Reactions Are Mixed and Giving Drops
Stan Mitchell, pastor of Gracepointe Church, a diverse congregation in Franklin, Tennessee, announced this month that the leadership of his church have decided to fully support the inclusion of gays in their church, including the right to marry same-sex partners. 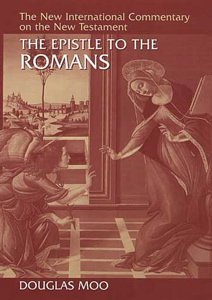 ​September 30, 1996 (12th edition)
​Douglas Moo – The Epistle to the Romans (New International Commentary on the New Testament). There is no shortage of commentaries on the book of Romans! Not only that, but there is no shortage of excellent commentaries to choose from. Pride of place appears to go to Douglas Moo and his contribution to the NICNT series. D.A. Carson commends it and says, “Moo exhibits extraordinary sense in his exegesis. No less importantly, this is the first commentary to cull what is useful from the new perspective on Paul while nevertheless offering telling criticism of many of its exegetical and theological stances.” (Amazon, Westminster Books) 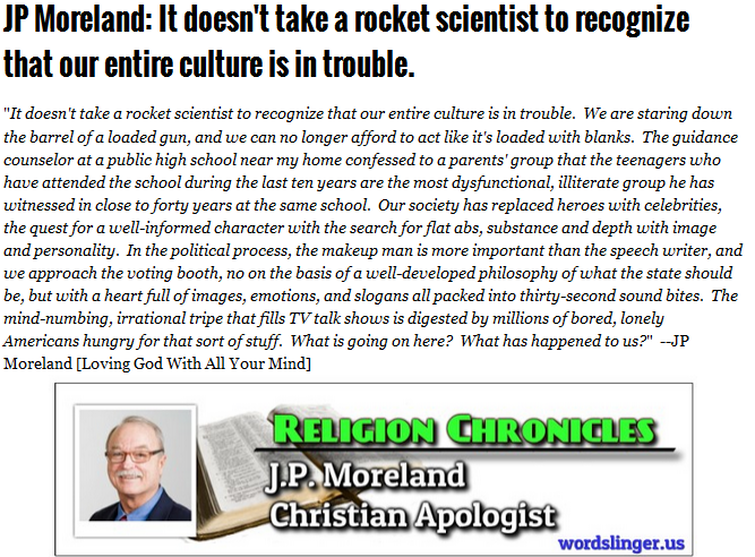 ​Jan 4, 2016: Youtube: Doubts, Frustrations, God, & The Church - JP Moreland and Mike Errie
An interview with J. P. Moreland and Mike Erre.
​Aug 11, 2021: Caffeinated Thoughts: ​Dealing With Doubt
J.P. Moreland warned in his work, Kingdom Triangle, that with this trajectory Christians experience “all the attendant land mines and booby traps that undermine the possibility of a powerful, confident, knowledgeable, vibrant Christian community.”
Jan 15, 2021: CHVN Radio: Christian philosophers and apologists call on RZIM board to acknowledge its 'complicity' in scandal

Jan 26, 2023: Ethics & Religious Liberty Commission: ​ERLC Board of Trustees Elect Dr. Miles Mullin to Serve Southern Baptists as Vice President, Chief of Staff
The board of trustees of the Southern Baptist Convention’s Ethics & Religious Liberty Commission has elected Dr. Miles Mullin II, to serve as the entity’s next vice president and chief of staff. ERLC President Brent Leatherwood made the recommendation to the board for Mullin’s appointment in a special called meeting of the board.​

​May 28, 2015: Fighting for the Faith: Mike Murdock's Lounge Lizard Session
• Dr. Mike Murdock's Lounge Lizard Session
• Patricia King's ISIS "Prophecy"
• What's Your Jericho?
• Sermon Review More Than Words by Jurgen Matthesius
Mar 3, 2015: Youtube: Dr. Mike Murdock - 20 Power Forces For A Successful Life
Success Is The Attaining of A Worth Goal. Stop Waiting For God To Make You Successful, You Decide.
Mar 2, 2003: Trinity Foundation: PROFIT in the pulpit
Mike Murdock peers into the television camera, seemingly able to see the people watching him. He says he can sense that the poor, the struggling and the lonely have tuned in to his program.