​     The Greek word "ecclesia," translated "church," means a "called out company," implying separation. The early church separated themselves from the evils of the world system. This is God's ideal for the church. Every effort to unite the church and the world system is opposed to God's mind and must end in confusion. The church will never convert the world or the world's systems, although the church can get "churchy" and the church can be immensely worldly. We are instructed to reach individual souls through our witness of Him. We are not instructed to convert governments. And therein is the first major error of Christian Nationalism.

​July 26, 2022:
In the '80s there came a notion which enveloped churches in America with something called "seeker sensitivity." Seeker-sensitive churches sought to make church attractive and more relevant to non-church people, or "seekers."
They revamped the music, spiced up the sermons, and created spectacular programming for kids. As a new young Christian in the 80s I remember this quite well...but accepted it because, being new, I had no benchmark that marked any alternative. I had nothing to compare. I was discipled, essentially, to make the message palatable. And I was taught that the main reasons was because people would be offended if there was nothing in it for them. (Salvation wasn't enough?)
It also came at a time when Ronald Reagan and Jerry Falwell's Moral Majority were making plays for the hearts of the "religious right" to win elections and gain political power. This was the same thing that Barry Goldwater warned conservatives about in the early 60s when he said: “Mark my word, if and when these preachers get control of the Republican party, and they're sure trying to do so, it's going to be a terrible damn problem. Frankly, these people frighten me. Politics and governing demand compromise. But these Christians believe they are acting in the name of God, so they can't and won't compromise. I know, I've tried to deal with them.” Barry Goldwater lost in 64 so the GOP took another 15 years or so to weigh Goldwater's words and decided he was wrong because the GOP didn't win.
The perfect storm came when fundamentalist teacher, Francis Schaeffer, started teaching that the biggest issue Christians should be dealing with right now was abortion. Christians took that to heart and then, instead of waiting for any Biblical oversight of God-ordained messages on how to approach the issue, they took up politics and became mostly Republicans. And then Reagan's surgeon general, Dr Koop, talked and wrote about the issue of abortion (personally he was against it; but politically public endorsed it) and it was wind beneath the wings of many a church member who was still undecided as to whether they should be politically active.
And "we wrestle not with flesh and blood" was never to be heard from again....and if it was heard it was watered down with a "yes, but" politics is the American way to deal with things and since God wants us to be patriotic. We must do politics.
It worked: Seekers came. Churches grew. But there was a cost. Attracting large crowds meant minimizing offense messages. Speaking about sensitive cultural issues erected roadblocks on a person's journey toward conversion, so sermons focused on individualistic, therapeutic concerns: How to improve your marital communication, how to battle anxiety, how to parent like a pro. Jesus's teachings on ethics, justice, economics, and sexuality were quietly escorted to a secure location. Messages about heaven or hell were heard only seldom because it was just too offensive to preach about.
The consequence of this inoffensive approach wasn't clear at the time but obvious in retrospect. Nature abhors a vacuum, as does the human mind. Because the church neglected to teach Christian ethics and a theology of the common good, the media happily filled the space. A new church growth strategy replaced the seeker-sensitive model: the proclamation of Jesus as a mascot for your political team. That's how we got here. The way I see it, todays Republican party is motivated by one major thing: hate. And I have exactly zero apologies for that observation. There are some exceptions in the GOP but they are becoming rare and few.
Christians must love our enemies, seek the welfare of our cities, speak the truth with courage, and make disciples in the image of Jesus, not the donkey or the elephant.
The foundation of this was inspired by an article in Newsweek, so I probably used some of their words. Christians, Too, Are Divided Over January 6 | Opinion (newsweek.com)

​July 24, 2022:
Anne Graham Lotz recently told an audience: "On the morning of Friday, June 24, the Supreme Court took a significant step in leading our nation to turn around when it overturned Roe vs. Wade. Six courageous justices chose life. I applaud their decision as a victorious first step for the well-being of our entire nation as we turn around from the federalized legalization of choosing death."
​     I do see a lot of Christians imply ideas similar to hers. But I don't think the decision by SCOTUS really means what they think it means. You cannot legislate morality. You can make a law...but for a nation to turn you have to change hearts. A moral victory would mean it would be unlikely that it could be overturned. SCOTUS laws, however, can. It's the nature of a court that is partisan and not actually meting out any justice, which is what the Supreme Court has become. The right wing, with the "Christians" they dragged along are seeking justice through laws made by men. And following the fascist railings of a mad man known as Donald Trump. They say that Republicans have done a lot of changes to election rules which are not fair.  And they have done it because they know that if elections are honest they can't win. A lot of Christian Nationalists have done the same with Christianity. They don't believe that by being honest that they can win..so they decided to become political and ignore good Christian morals. Change a law...you win til it changes again. Change a heart..it's forever
July 21, 2022: Newsweek: ​Christians, Too, Are Divided Over January
​As the January 6 Committee hearings come to a close, Americans across the nation remain divided about the events of that fateful day. So do American Christians, many of them in the same churches.
Outside the Capitol at the Stop the Steal rally, you could see sandwich boards with "Jesus Saves" and homemade signs with Bible verses. And some protesters stormed the Capitol with Christian signs in tow. They raged in the name of Jesus, seeking to take their government back from predatory Washington elites.
July 19, 2022: A Public Witness: ​Is the Old Line Falling to Christian Nationalism?
​As Doug Mastriano celebrated his victory in the Republican gubernatorial primary in Pennsylvania in May, his rally featured a bit of a who’s who of Christian Nationalism. Musician Sean Feucht, who protested COVID-19 health measures, opened the political event with Christian praise music. Mastriano quoted scriptures as he framed his campaign as a spiritual movement. Former Trump lawyer and now Mastriano campaign advisor Jenna Ellis (who’s not a fan of us) praised the Pennsylvania nominee for leading “a great victory in the name of Jesus.”
And another person introduced as a “special guest” spoke that night at the rally in Chambersburg, Pennsylvania: Dan Cox, a Republican gubernatorial candidate … in Maryland. 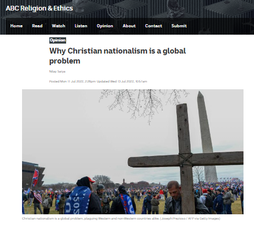 ​Christian nationalism has also been surging in the developing world, with tragic consequences. Nowhere has this been more evident than in the region of Central Africa — especially the countries of Uganda and Central African Republic. In Uganda, a particularly bizarre and vile form of Christian nationalism, fused with occultism, has given rise to one of the world’s most brutal terrorist organisations, the Lord’s Resistance Army, led by the infamous warlord Joseph Kony. The Lord’s Resistance Army achieved widespread notoriety for its gross violations of human rights, including murder, mutilation, mass abductions, trafficking of children, and use of child soldiers in its operations. Since its inception, the Lord’s Resistance Army has kidnapped more than 100,000 children. The objective of the group, as articulated by Kony, is an explicitly Christian nationalist one: for Uganda to be a country governed by the Ten Commandments.
​--ABC Religion & Ethics: Nilay Saiya; Why Christian nationalism is a global problem July 11,2022 ​Gender and sexuality are without a doubt two of the hottest issues of the day. Both are extremely personal, cutting too close to home, and as a result they need to be handled with great care. Conversations about these sensitive topics need to bear in mind that they do not concern mere issues, but fellow humans—“people to be loved,” as Preston Sprinkle suggests in the title of one of his books.
Yet we evangelicals often resort to no less than warmongering rhetoric. We fall prey to the divisive “us versus them” pattern of thinking. Believing ourselves to be in a culture war against the mainstream society, we feel the need to make our voices heard even when no one asked. To the outsider—the one we are pointing our righteous fingers at—we come across as lunatic haters, rather than prophets of hope or bearers of good news.
We may argue that “the Bible is clear on these issues”, adding that we have been called to preach “the truth in love”. And I’d like to believe that, deep down inside, our motivation is love for our neighbours. Yet, more typically, it seems to me that we are speaking out of fear or disgust. If this is our strategy for bringing people to Christ, we should not be surprised when it fails, causing backlash from those we are seeking to convert to our point of view. -​Evangelical Focus: The unhelpful ways we talk about gender and sexuality
​“No man by nature and left to himself has ever sought God…If you and I can claim as Christian people that we are seeking God, there is only one explanation for it, and that is that God has first sought us…Show me a man who can say honestly that he is seeking after God, and I will show you a man who has been quickened by God’s Spirit, whom God has sought.” – Martyn Lloyd-Jones