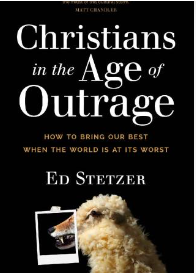 ​"Just because we can say something doesn’t mean we should. There are ways of confronting abuses of power, and I am certainly not condoning a mindless obedience. But Christians need to understand that the best place for difficult conversations is usually not online.”

"Outrage is motivated by a desire to punish or destroy rather than reconcile or refine. It is frequently accompanied by hubris and a confidence in its judgment, categorically rejecting any nuance. Outrage is fast and decisive rather than reflective, choosing to exhibit God’s retribution rather than reflect his persistent, steadfast love." -Ed Stetzer; Christians in the Age of Outrage
Mar 24, 2022: By Faith: ‘He Gets Us’ Campaign Aims to Spark Conversations About Jesus
Ed Stetzer, executive director of the Billy Graham Center, has been helping to share information about the initiative with Christian leaders and faith-based organizations across the U.S.
Feb 4, 2022: American Conservative: ​Evangelicals: Who Are The Good & The Bad?
​In my circles, there has been a lot of discussion about Megan Basham’s big piece about how the federal government used some high-profile Evangelical leaders to spread government information — and misinformation — about Covid to the broader Evangelical community. (If you don’t have a Daily Wire account, the piece has been reprinted here, available to all.)
As regular readers will know, I am not an anti-vaxxer, but this is genuinely a disturbing piece. The gist of it is that the feds leveraged the high status the Evangelical scientist Francis Collins has with Evangelical influencers to sell the government’s Covid line to Evangelical churches. Basham begins by citing Wheaton College’s Ed Stetzer, a dean and executive director of its Billy Graham Center, giving a friendly interview to Collins early in the pandemic:
Aug 8, 2021: Christian Post: ​California recall: Calling the Christian Left's bluff on racial equity
Or how about other progressive Christian figures, like Russell Moore, Ed Stetzer, Pastor David Platt, Beth Moore or author Gregory Thompson, who have all advocated for greater levels of diversity. ​
​​Here are some key stats indicating the views of young evangelicals on hot button issues:This is where it is appropriate to say that we need to be careful with our data here. This report was released in 2010 and is based on data from 2007. It is fair to say that, in the last few years, it is likely that young evangelicals have shifted in their views a bit on some of these issues, namely ones surrounding homosexuality.
However, I still think we are safe saying that the moral and political views of young evangelicals are still more likely to line up with those of their parents than those of their non-evangelical peers.
It is easy to simply play “blame the millennial” for all the problems in the church and culture, but the statistics don’t bear that out. The vast majority of millennials remaining in the church share the values of older members. The much larger issue is that more millennials are becoming Nones and others are looking for spiritual fulfillment outside the church. Instead of critiquing the young adults who have stayed, we should be leveraging them to reach their peers.  --Ed Stetzer (Christianity Today 08.10.16
​July 22, 2015: Charisma: What? Evangelicals Come Against Franklin Graham's Views on Islam
"Most recent headlines regarding Islam don't paint a picture of religious freedom—so we should not be surprised by the strong minority that considers Islam a threat to religious freedom," said Ed Stetzer, executive director of LifeWay Research.
Apr 8, 2015: Ed Stetzer: Christianity Today: The Lego Principle: An Interview with Joey Bonifacio
​Feb 27, 2015: Ed Stetzer: Christianity Today: Stories of Transformation: Emmanuel Community Church Looks for Purpose
​Feb 13, 2015: Pulpit and Pen: Ed Stetzer, Charles Spurgeon, And Preaching to Circuses
Ed Stetzer has faced some criticism lately. Criticism, of course, that began with some unkind words to a certain friend of Pulpit & Pen on Twitter and culminated in an open letter to Lifeway by one of the victims of the entity’s pursuit for filthy lucre, a young man named Alex Malarkey, which just happened to wind up first on this blog and then on every major news source and media outlet in the western world. Of course, Stetzer and others at Lifeway don’t exactly deal well with criticism.
​Feb 11, 2015: Lifeway: One in Three Americans Worry About Sharia Law Being Applied in America
“ISIS has stirred an odd religious debate in America today,” said Ed Stetzer, executive director of LifeWay Research. “In a nation that has long espoused religious freedom, Americans are thinking long and hard about the kind of society Islam fosters – especially the more radical groups that say they are Islamic – and whether Sharia law would ever be adopted here.”
Jan 9, 2015: Ed Stetzer: Christianity Today:﻿﻿ ﻿﻿The Bible Is More Than Stories of Morality
Dec 18, 2014: Ken Chitwood: 2014's Religion & Culture Top Stories & Awards
Son of renowned Christian author and theologian Francis Schaeffer, Frank Scaeffer is no new news. He is a gregarious and outspoken atheist who "believes in faith." But this year he got embroiled in a tit-for-tat with Christianity Today and evangelical leader Ed Stetzer over a story about Bart Campolo, son of famed Christian leaders Tony and Peggy Campolo, leaving the Christian faith. On top of all this, Frank came out with a new self-published book this year, titled Why I am an Atheist Who Believes in God: How to give love, create beauty and find peace.
​Sept 30, 2014: Ed Stetzer: Christianity Today: Deconversion: Some Thoughts on Bart Campolo’s Departure from Christianity
​Sept 9, 2014: New York Times: Megachurch With a Beat Lures a Young Flock
And Ed Stetzer, the executive director of LifeWay Research, an organization based in Nashville that studies practices in American Christianity, declared in an analysis of Hillsong, “In sensory stimulation, Hillsong’s productions rival any other contemporary form of entertainment.