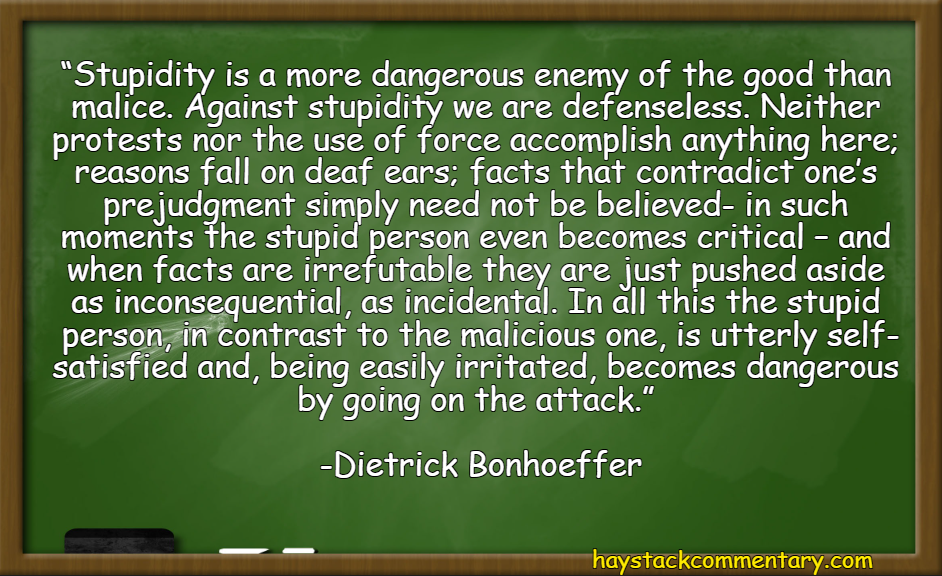 ​
Sept 4, 2021: Sampson Independent: ​You can’t fix stupid
Dietrich Bonhoeffer was a German minister during the time leading up to World War II. He spoke out strongly against Adolf Hitler and the Nazi dictatorship, especially against the Jewish persecution and genocide by the Nazis. This was during a time when most of the German church was silent against Hitler’s barbaric actions.
“Costly grace is the treasure hidden in the field, for the sake of it a man will gladly go and sell all that he has. It is the pearl of great price for which the merchant will sell all his goods. It is the kingly rule of Christ, for whose sake a man will pluck out the eye which causes him to stumble; it is the call of Jesus Christ at which the disciple leaves his nets and follows him.” Dietrich Bonhoeffer in his book, The Cost of Discipleship (P. 47)
​
"The Christian needs another Christian who speaks God's word to him. He needs him again and again when he becomes discouraged, for by himself he cannot help himself …. He needs his brother man as a bearer and proclaimer of the divine word of salvation." -Dietrich Bonhoeffer (Life Together)
​Aug 25, 2016: Warren Throckmorton:  The Popular Bonhoeffer Quote That Isn’t in Bonhoeffer’s Works
Dietrich Bonhoeffer is a modern day hero among evangelical Christians. Killed by the Nazis in 1945 for resisting the regime, Bonhoeffer’s fame among evangelicals increased after the publication of Eric Metaxas’ acclaimed biography of the Lutheran pastor. For many Christians who feel compelled to take a stand on principle, Bonhoeffer has become an inspiration and guiding light. On that point, perhaps the most repeated and celebrated quote attributed to Bonhoeffer is
Silence in the face of evil is itself evil. God will not hold us guiltless. Not to speak is to speak. Not to act is to act.
​

Apr 9, 2015: Christian Apologetics Alliance: Bonhoeffer’s Solution to The Problem of Pain
Dietrich Bonhoeffer saw and experienced the unmistakable face of pain and suffering during the reign of Nazism in Germany.
Dietrich Bonhoeffer (4 February 1906 – 9 April 1945) was a German Lutheran pastor, theologian, anti-Nazi dissident, and key founding member of the Confessing Church. His writings on Christianity's role in the secular world have become widely influential, and his book The Cost of Discipleship became a modern classic.
Apart from his theological writings, Bonhoeffer was known for his staunch resistance to the Nazi dictatorship, including vocal opposition to Hitler's euthanasia program and genocidal persecution of the Jews. He was arrested in April 1943 by the Gestapo and imprisoned at Tegel prison for one and a half years. Later he was transferred to a Nazi concentration camp. After being associated with the plot to assassinate Adolf Hitler, he was quickly tried, along with other accused plotters, including former members of the Abwehr (the German Military Intelligence Office), and then executed by hanging on 9 April 1945 as the Nazi regime was collapsing.