​July 24, 2022:
Anne Graham Lotz recently told an audience: "On the morning of Friday, June 24, the Supreme Court took a significant step in leading our nation to turn around when it overturned Roe vs. Wade. Six courageous justices chose life. I applaud their decision as a victorious first step for the well-being of our entire nation as we turn around from the federalized legalization of choosing death."
​     I do see a lot of Christians imply ideas similar to hers. But I don't think the decision by SCOTUS really means what they think it means. You cannot legislate morality. You can make a law...but for a nation to turn you have to change hearts. A moral victory would mean it would be unlikely that it could be overturned. SCOTUS laws, however, can. It's the nature of a court that is partisan and not actually meting out any justice, which is what the Supreme Court has become. The right wing, with the "Christians" they dragged along are seeking justice through laws made by men. And following the fascist railings of a mad man known as Donald Trump. They say that Republicans have done a lot of changes to election rules which are not fair.  And they have done it because they know that if elections are honest they can't win. A lot of Christian Nationalists have done the same with Christianity. They don't believe that by being honest that they can win..so they decided to become political and ignore good Christian morals. Change a law...you win til it changes again. Change a heart..it's forever 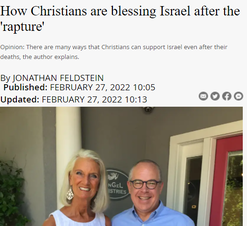 Feb 27, 2022: Jonathan Feldstein wrote this article from The Jerusalem Post:
As an Orthodox Jew, I have to admit, talking about the Rapture is not something that comes up in casual conversation. However, in the capacity of building bridges between Jews and Christians, I am privileged to be part of an incredible range of conversations I never thought I’d have. This was one of them.
It was a conversation for which I could not have been less prepared, and one I will never forget.
Anne’s comment was not just theological rhetoric, but something that came from her very core.
“What a beautiful affirmation of your faith,” I said, “and an expression of your heart for Israel to stand with and bless Israel, even after you’re no longer here. I love it and would be privileged to be part of that.”
Sometime later, Anne shared with me that should the Rapture take place before her death, she had signed documents that leave her home to me. It still moves me deeply to think about this and everything that it represents, just like Ruth’s eternal her love for Naomi and the Jewish people.
"Our nation is being torn apart by anger. Frustration. Distrust. News accounts are filled with “he said/she said,” followed by violent, vehement disagreement as to what was actually said or done. No one seems to trust anyone about anything." -Anne Graham Lotz Feb 19, 2022
​Jan 13, 2022: Christian Post: ​Billy Graham’s granddaughter suffers 2 heart attacks caused by ‘broken heart syndrome’
​In a Facebook post on Tuesday, Lotz’s mother, evangelist Anne Graham Lotz, shared that her daughter was currently in the hospital.
​Well, I pray that God will use this event to change us forever in a positive way. And that will strengthen our faith in him. I thought of all those people who have died in this tragedy. It doesn't matter right now what political affiliation they had or what denomination they belong to or what religion or what the color of their skin was or their stock portfolio.
What matters is their relationship with God. I would like to see Americans begin to focus on some of the primary things and some of the things that are more important than just, you know, entertainment and pleasure and making more money. -Anne Graham Lotz on 911 attacks; Sept 13, 2001